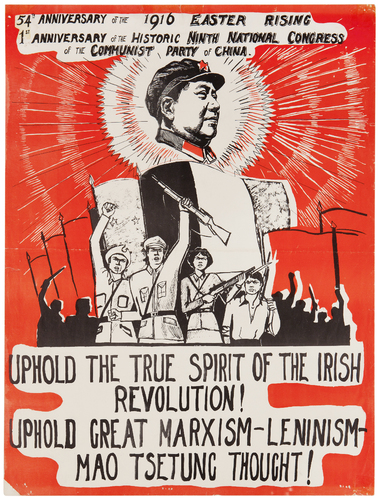 Of all the 1916 leaders, Pádraic Pearse has suffered the most calamitous collapse of reputation. Once acknowledged as first amongst equals, he now tends to be tucked away somewhere in the background in those familiar artistic depictions of the Proclamation’s signatories. His eccentric spiritualism and notorious enthusiasm for ‘blood sacrifice’ is unappealing to modern sensibilities. Modern sensibilities can be unfair – we do well to remember what Pearse wrote in February 1916: ‘Obviously, if a nation can obtain its freedom without bloodshed, it is its duty so to obtain it.’[i] But there’s no denying that Pearse was a complex and conflicted character.

It is unfortunate, nonetheless, that the last writings of Pearse have been analysed more for their psychological than their political content. For the real interest resides in the latter. The last pages of his final publication clearly maps out the historical lineage of the tripartite alliance that was to launch the insurrection in Dublin. For Pearse, Theobald Wolfe Tone, a revolutionary republican of the 1790s, was the nonpareil exemplar of the nationalist tradition. But, in curiously Hegelian fashion, Pearse argued that the full content of separatist nationalism had to develop itself by splitting into strands: the romantic nationalism as personified by Thomas Davis, the passionately militarist nationalism of John Mitchell, and the socially minded nationalism of James Fintan Lalor. For Pearse, the time had come for the three streams to flow in one mighty surging movement.

We might expect a Marxist like James Connolly, representative of ‘the more virile labour organisations’, to recast Pease’s ‘movement’ as a class alliance harnessing the vanguard of the working class to perfervid nationalists of impeccably petty bourgeois origin, and as such to reject it. It is certainly true that Marx and other socialist revolutionaries had countenanced class alliances between the proletariat and the petty bourgeoisie in the 1840s. But it had become an article of Marxist faith in the late nineteenth and early twentieth century that, in the age of imperialism, the mass of the petty bourgeoisie had passed over to the side of reaction. ‘Social democracy has no more bitter enemy than the reactionary democracy,’ Karl Kautsky wrote.[iii] While certainly individuals and small groups of the petty bourgeoisie might pass into the socialist camp, Kautsky admitted, as a class movement it must stand on its own feet.

For Kautsky, the worker movement should leave characteristically petty bourgeois movements to flounder in the tides of history. It was not the historical role of the worker movement to actively combine with the petty bourgeoisie in their struggle against the ‘feudal’ remnants of European society, or indeed the neo-feudalism of colonialist rule. Workers should oppose egregious oppression of non-proletarian strata such as the petty bourgeoisie, the peasantry, and the natives of the colonial world, but refuse to block with their social projects of self-preservation:

As with the case of maintaining the handicrafts and the peasantry, it is a reactionary utopia to call upon social democracy to support the resistance of the indigenous peoples of the colonised countries against their expropriation. But it would be flying in the face of the interests of the proletariat if one wanted to call upon it to support capitalists by granting them the assistance of the power of the state. Such work is too dirty for the proletariat to become an accessory. The whole rotten business is one of the historic tasks of the bourgeoisie; and the proletariat should be glad not to have to soil its hands with that.[iv]

The instinct of most pre-war Second International socialists was to support Home Rule for Ireland on general democratic principles, and for the purely functional purpose of putting the national question to bed, permitting the development of a modern, socialist, class conscious worker movement in that country. But petty bourgeois politics was an affair to be left to the petty bourgeoisie.

James Connolly was obviously of another view, at least by 1916.[v] In the Irish context, this is not entirely surprising – there was a considerable déclassé bohemia in Dublin and elsewhere, as recently anatomised by RF Foster and Senia Pašeta, that luxuriated in all the fashionable progressive issues calculated to épater le bourgeois et l’anglais.[vi] Still, it’s worth bearing in mind what Connolly was doing in 1916 – subordinating his followers to an obviously petty bourgeois movement, submerging socialism within nationalism to the point of eclipse, and associating himself with the Kaiser’s Germany.

What is most surprising, perhaps, is the attitude of Lenin. He positively celebrated the 1916 insurrection and, in so doing, he rehabilitated the petty bourgeoisie. Lenin’s observations are well-known:

To imagine that social revolution is conceivable without revolts by small nations in the colonies and in Europe, without revolutionary outbursts by section of the petty bourgeoisie with all its prejudices… to imagine all of this is to repudiate social revolution.… Whoever expects a ‘pure’ social revolution will never live to see it. Such a person pays lip service to revolution without understanding what revolution is.… Inevitably, sections of the petty bourgeoisie and of the backward workers will participate in it – without such participation, mass struggle is impossible, without it no revolution is possible – and just as inevitably will they bring into the movement their prejudices, the reactionary fantasies, their weaknesses and errors. But objectively they will attack capital… [vii]

As Leszek Kołakowski has pointed out, Lenin here was quite radically diverging from the traditional strategy of working class political solipsism that had underpinned Second International Marxism. ‘The statement that a proletarian revolution could not happen at all without the reinforcement due to ‘survivals of feudalism’ was a novelty in Marxism and a complete departure from the traditional theory.’[viii] Lenin’s individual innovation, of course, became of world historical significance with the Russian revolution and the establishment of the international communist movement. 1916 inaugurated for this socialist revolutionary left an anti-imperialist strategy of class collaboration with just those petty bourgeois movements particularly susceptible, as Marx had observed, to authoritarianism and worship of the ‘man on horseback’.[ix] That official Communism itself disdained ‘bourgeois democracy’ sealed the deal. The intertwining of Communism and various shades of ‘anti-imperialist’ authoritarianisms is a red line running through the twentieth century.

In Ireland, 1916 catalysed process which was to culminate in the separation of twenty-six counties in Ireland from the United Kingdom, and the establishment of a strikingly petty bourgeois independent state. While undoubtedly a conservative polity of ‘frugal comfort’, independent Ireland was far from reactionary and immeasurably more democratic than the Ireland of the Union. Its petty bourgeoisie ethos got a rather unfair press in the Celtic Tiger age of bourgeois triumphalism.[x]

But 1916 can be seen as a turning point not just towards the bathetic conclusion of a messy Irish independence and partition. It also opened an era of anti-imperialist ‘national liberation struggle’, with the revolutionary left finding its footing less amongst the working classes of the first world, but increasingly in the multifarious petty bourgeois, peasant and déclassé strata of the colonial and ex-colonial world. Ireland, in fact, was an advanced nation seeking self-determination, but its example was shoehorned into the quite different circumstances applicable to global colonialism where the social basis of stable democracy was so evidently lacking.

It was a Leninist article of faith, and one generalised much more widely amongst progressives, that there is no greater sin than imperialism, and the struggle of any people against the imperialist oppressor, no matter that they be immured in reactionary atavistism or antidemocratic ideology, is justified. John Rees, sometime doyen of the British Socialist Workers Party, and an intellectual for the catchall anti-imperialist Stop the War Coalition, explains the line:

If the anti-colonial movements or states that are opposed to the major powers defeat the imperial powers it weakens the whole imperial system. This is true whether or not those who lead such struggles or stand at the head of such states have this outcome as their conscious aim. Lenin argued that the political complexion of the leaders of small nations – be they nationalist, fundamentalist, dictators or democrats – should not determine whether socialists in the major imperialist countries oppose their own governments in time of war. It is enough that the defeat of the major imperial powers would advance the cause of oppressed people everywhere for socialists to commit themselves to the principle of self-determination for small nations.[xi]

This left-wing version of FDR’s comment on Latin American dictators – ‘they maybe sons of bitches but they’re our sons of bitches’ – has long lost much traction outside the circles of devotees. The age of ‘anti-imperialism’ seems to be drawing to a close. Partly, of course, this is because the imposition of foreign government on peoples is now quite a rarity in the world. But ‘anti-imperialist’ ideology insists that the very existence of capitalist great powers is an affront to the democratic autonomy of all the rest of us. ‘Anti-imperialism’ survived classic imperialism. But its traditional lineaments are fading into desuetude.

As Ireland was there at the beginning, so it was at the end. In retrospect, the compromise settlement of the modern Northern Irish Troubles can be seen as a coda to a particular mode of anti-imperialism. The IRA and our 21st-century terrorists are very different creatures indeed. What do we make of ‘anti-imperialists’ when it is reactionaries of the purest water hurling defiance as the US and Europe? There comes a limit, even for the most engrained ‘anti-imperialist’, when the peccadilloes of one’s allies of convenience can no longer be winked at. The apocalyptic mania of death cults – Al Qaeda, ISIS / Daesh, Boko haram, etc. – have nothing in common, it needs hardly be said, with even the most egregious rhetoric and acts of Pádraic Pearse.

[i] ‘The Spiritual Nation’ (13 February 1916) in Pádraic Pearse, Political Writings and Speeches (Dublin, 1966), p. 323. It’s likely that Pearse’s sublimated sexualising of boys, an eroticism to which he was probably blind himself, most makes us embarrassed. Oddly enough, Casement’s far more explicit (if private) fantasies about underage boys have made him something of a martyr of modern sexual liberalism.

[v] As a hard-line anti-reformist, the younger Connolly had been biting about the influence of middle-class ‘careerists’, as he saw them, in the international socialist movement. See, for example, ‘The New Danger’ (April 1903) in Aindrias Ó Cathasaigh, The Lost Writings of James Connolly (London, 1997), pp. 60-1.

[vii] Lenin, ‘The Irish rebellion of 1916’ in William J Pomeroy (ed.), Guerrilla Warfare and Marxism: a collection of writings from Karl Marx to the present on armed struggles for liberation and socialism (London, 1969), p. 104.

[x] The indictment of petty bourgeois mentalities as retarding the modernisation of Ireland was brilliantly stated in Joe Lee’s 1989 book, Ireland, 1912–1985: Politics and Society.

Marc Mulholland is a college fellow and university lecturer at St Catherine’s, Oxford University. His publications includeTerence O’Neill (2013). He is currently writing two books, one on the concept of the ‘proletariat’ in political thought from the French Revolution to the 1930s; another on Emmanuel Barthélemy (1820–1855): revolutionary, jailbird, duellist, inventor, and murderer.