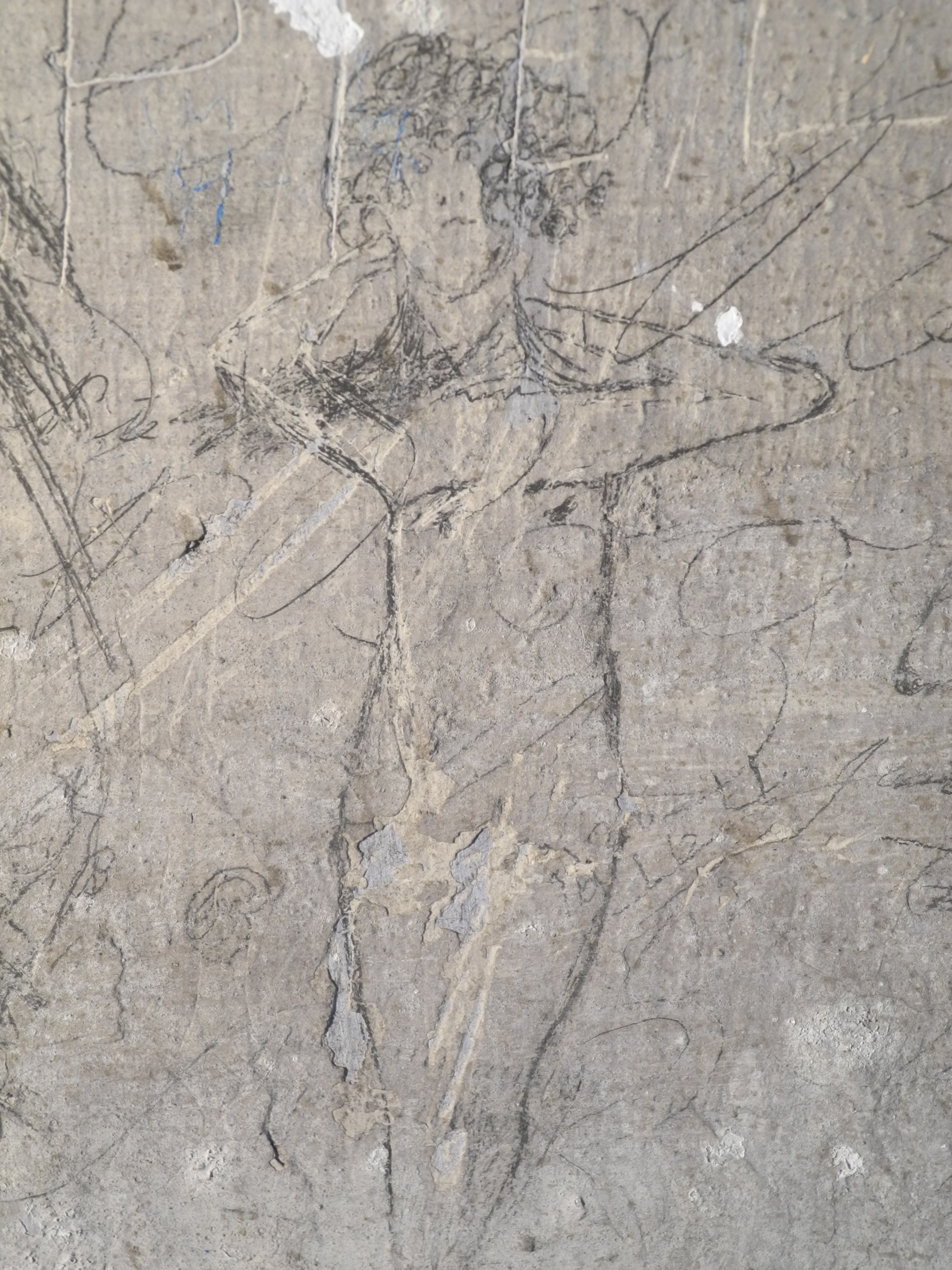 Having spent much of my time since 2012 conducting fieldwork in, and thinking about the material remains of, Kilmainham Gaol in Dublin, one would assume that the leaders of the Easter Rising and their legacies would be paramount in my thoughts. They are not. While Patrick Pearse, James Connolly and many of their fellow leaders from Easter Week were executed at the site and continue to dominate the public imagination, their relationship to the site is not immediately evident in the material remains of the prison buildings. Due to successive waves of occupation (and whitewashing – the last of which was officially recorded prior to the introduction of female prisoners during the Civil War in the autumn of 1922), there are very few remnants from 1916 that can be retrieved from the standing remains of Kilmainham Gaol. However, those pieces of graffiti that remain from 1916 often presence an unlikely, and uncomfortable, community held within its walls.

My work at Kilmainham Gaol has centred on locating, recording and deciphering graffiti from the walls of every stairwell, cell, corridor and basement. As an archaeologist by training, I had previously explored the materiality of imprisonment from the (then) much more intact structures and artefacts of Long Kesh/Maze prison in Northern Ireland. I learned from that experience that material culture has the potential to tell us different, often much more nuanced narratives, which reveal broader experiences of place. These are often the types of mundane but insightful stories that are bypassed in the more official, self-conscious papers of governments, officials and even survivors of politicized prison regimes. This was the case with Kilmainham Gaol: the extent of graffiti I found was staggering in both quantity and range, and illuminated a number of complicated narratives. In particular, the older West Wing retains almost fully intact cell walls covered with graffiti dating from its final years of action: the period we now know as ‘revolutionary Ireland’. Kilmainham Gaol had closed as a criminal prison in 1910, opening only sporadically to hold political prisoners from 1916 onwards. It finally closed in early 1924. As one would expect, the majority of the graffiti from the revolutionary period dates from the last period of use, the Civil War, but some traces date back to 1916 and before. From the thousands of individual pieces of graffiti – both partial and complete – that continue to cover the walls of the West Wing, it is clear that surviving graffiti reflects not only those who decided to imprint their presence but also the vagaries of survival, abandonment and time. What remains is an uneven survival; skewed material evidence of that tumultuous period presencing some, while covering the last traces of others. There is no evidence that any of the executed leaders left their traces on the walls, but some lesser-known prisoners who were held during that time came back, often years later, to mark the walls, recording their presence, and that of their comrades, for posterity. Nellie Gifford-Donnelly – whose sister Grace Gifford-Plunkett had married her sweetheart Joseph Plunkett in the Gaol chapel the night before his execution – left notable traces when she returned to the abandoned gaol in 1934 in three cells located on the so-called ‘1916 Corridor’. Written with a firm hand on the interior door surround are notes detailing who had been held in those particular cells in the aftermath of the Rising. One notes the cell of her brother-in-law Thomas MacDonagh, providing his name in Gaelic, ’as he spelled it’ [see IMAGE 2]; she speculates, with some uncertainty, as to the cell of Countess de Markievicz and the final note humbly highlights her own cell. Given the enduring emphasis on the leaders and predominantly male-dominated actions associated with nationalist insurrection it is not a surprise that, of the three, only her cell remains unadorned with a plaque noting its previous occupant. There are other occupants of 1916 who also leave their traces. The East Wing of the prison, the more spectacular mid-19th century Panotpicon with its glass ceiling and cinematic potential (it was the prison film set for ‘The Italian Job’ and ‘In the Name of the Father’), has not retained so much graffiti. The removal of graffited walls was a deliberate act of the ‘Kilmainham Gaol Restoration Society’, the voluntary group who restored the prison in the early 1960s. At that time it lay in a ruinous state, despite the impending 50th anniversary of the Rising in 1966, so the Restoration Society aimed to restore of the building to its 1916 ‘golden age’ and in doing so to bypass the civil war. One way they tried to avoid the spectre of internecine conflict was to rid this wing of any graffiti from the period; in all only seven cells retain substantial remnants of the original plaster on their walls. The rest are chipped off to the underlying brick with only the backs of the metal doors and surrounds of the exterior-facing doorways revealing traces of those who previously inhabited the cells. The majority of the graffiti dating from 1916 that survives in this context is not linked to the leaders or even the masses held for their role during the Rising. Surprisingly, the few decipherable graffiti from 1916 originate from a largely forgotten group of inhabitants whose presence became even less tolerated in the Free State than those who mentioned the Civil War: barracked British soldiers, many of whom were of Irish birth.

The sheer scale and range of graffiti created by British soldiers within the assemblages at Kilmainham Gaol were a shock, given how little information is available on this particular group in the interpretation of the site. While the records on the uses and administration of both Kilmainham Gaol are sparse for this later period of use, it is clear from the soldiers’ graffiti that they were barracked, and occasionally imprisoned for misdemeanours, across this wider military landscape in the years leading to, and including, the period of the Rising. Indeed, much of the identifiable graffiti on the backs of the doors of cells in the East Wing of the cells originates from British soldiers, many noting the short sentences they were serving for disciplinary infringements while barracked at the site. Akin to particular areas in the West Wing (especially the bottom corridor), names, occupations, regiments and even anti-war sentiments appear as do more sinister images of the ‘enemy’, death heads, and weaponry [see IMAGE 3]. Graffiti in both locations is often in partial or poor condition, on the backs of doors in the East Wing or under varying degrees of mass whitewashing in the West Wing. However, taking the partial traces of both wings together they provide a significant insight into the previously little discussed world of British soldiers at Kilmainham Gaol during this time. The graffiti of soldiers evidently played a number of roles for their creators: it served to mark their existence at a seminal time and place; it acted as a testimony of their personal origins, and allowed them to imprint themselves into wider military networks and mark their place in history. Many of these soldiers included their ‘home’ address as well as their regimental connections and in doing reveal the lack of contradiction in being an Irishman who could proudly serve in the British Army. Despite evidence of defacement, one can clearly read graffiti on the back of a door in the middle floor of the East Wing: ‘PTE P Reddy / 25267 / 2nd Inniskilling / ?84 days_ Fusi_’ Military researcher Paul Turnell has found that Reddy was a married Dubliner and member of the Royal Inniskilling Fusillers, A Coy, 8th Battalion. He died in action on 16 Aug 1917. On more frivolous matters they drew pictures of naked girls, and depicted movie stars such as Pearl White. They even created signs requesting behavioral standards of their fellow soldiers, including requests for ‘No Swearing’.

There are few surviving pictorial graffiti examples located in the cells of the East Wing. The nature of the metal doorways, and use of pins to create graffiti, made creating drawings more difficult than carving counting lines or rudimentary text, which instead are frequent occurrences. Rather, the pictorial images located in the East Wing are confined to plaster walls that were relatively untouched in the parts of the administrative area and basement of the wing. This includes one large graffiti assemblage of overlapping text and images that is located near a window in the basement; in an area one can only assume soldiers could gather in small numbers and relatively secrecy to waste time. This substantial assemblage of graffiti appears to have been created by a number of hands, over some time and was not subsequently whitewashed (possibly due to it not being located?). The overlapping text and pictures cover a range of graffiti forms that are found elsewhere throughout the Gaol complex: there are names and ranks of soldiers, side profiles of young men with fascinating facial hair, and highly detailed drawings of naked young women. Of the more complete frontal nude, there is a decidedly sinister engraved defacement of the pubic area, with a violence that does not appear to be replicated in female nudes located in the West Wing. Throughout the Gaol complex there are numerous examples of nude women graffitied on the walls. These examples have mainly been heavily whitewashed, when located, but some aspects now peek through or reveal themselves under strong flashlight to show a wide range of nudes that covered the walls. The fact that female nudes always appear close to textual graffiti revealing a military source suggests a correlation and causation between the two: that British soldiers were creating nude images rather than political prisoners.

If one takes the graffiti assemblages dating from c1916 found through both Wings in totality, it is clear that Kilmainham Gaol played multiple roles during the upheavals of the revolutionary period. Whether a military barracks or a political prison, Kilmainham Gaol was a complicated place that has now been shoe-horned into a particularly one-dimensional narrative. One piece of graffiti emphasizes this most clearly when it states: ‘‘Gaol 8 hours ?ago / Rebles [sic] 1916′ suggesting the possibility that it was both a barracks and political prison simultaneously. Clearly, many of those housed and detained within the walls of this prison were aware of the significance of events of this time; their roles have not been retained in public memory to an equal extent. The graffiti assemblages reveal a variety of different narratives and I argue that it is only in investigating them more fully, and bringing them together, that we can construct a more nuanced history not only of the site but also of this period. By bring together these various threads of graffiti we can not only add to our understandings of the operation of this site but also reveal hidden, often forgotten – if not obfuscated – histories of this most important of iconic buildings of the Decade of Commemorations.

Laura McAtackney (Laura.mcatackney@cas.au.dk) is Associate Professor, Sustainable Heritage Management (Archaeology), at Aarhus University. She is the author of An Archaeology of the Troubles: The Dark Heritage of Long Kesh/Maze Prison (2014). For further details of her Kilmainham project please see: http://kilmainhamgaolgraffiti.com.