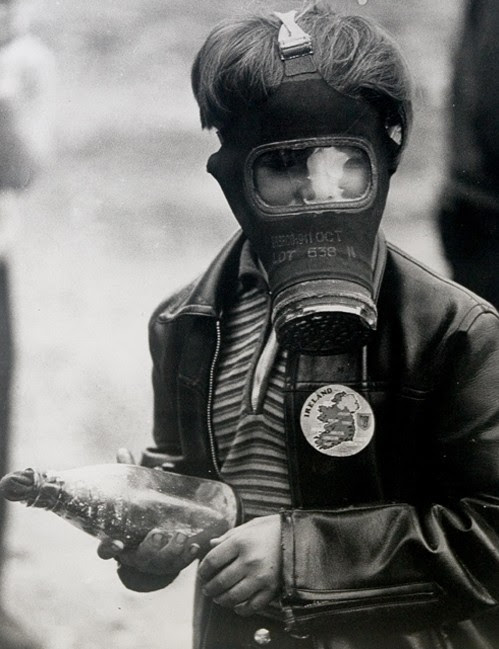 Most Irish people in 1916 did not want an armed rising. If the British connection had been the source of many of Ireland’s ills over the last three centuries, over the last three decades the state had begun to make amends. There had been a comprehensive programme of land reform and Home Rule was at last on the statute books. The trend looked good, even if further change was stalled over the period of the Great War.

Most people in Northern Ireland in 1968 thought things were getting better, and that the progressive policies of Terence O’Neill and of the new nationalists and civil rights activists were the way of the future. The trend looked good even if actual change was slow.

From rebels to states: types of legitimacy

In 1916 armed rebellion was quickly defeated. As some contemporaries pointed out it was carried out by a small, self-selected group with neither an electoral mandate nor a coherent military strategy. Some defined it as an attempted coup. This was not the definition that stuck. That it was publicly and popularly defined as a rising was– from a nationalist and republican standpoint – its great achievement. The question is why this definition won.

To find an answer we have to turn our attention away from the small armed group to the state. Donatella Della Porta has shown the common features of the radicalization, militarization and deradicalization of groups as diverse as insurrectionist socialists, Baader Meinhof, Red Army Faction, ETA, the Provisional IRA and a range of far right militants. All of them wanted to become major carriers of public feeling, like the IRA during the Irish independence struggle. Why some did and some didn’t succeed lies less in the character of the group than in the character of the state – its allies, its army, and its relationship to its wider public. Here I look only at the latter, in particular at the public sense of the legitimacy of the state.

Legitimate states – by which I mean states held by the public to be legitimate – get away with sins of commission and omission. It is ‘our’ state, with all its flaws and so we, the citizens, are ready to believe its excuses when things turn out badly. Repression, as in Guantanamo, is seen as unfortunate in its side effects, badly managed, no doubt with some ‘bad apples’ in the military, but also as necessary. Restrictions of civil liberties are after all justified in liberal thought to secure public order and liberty for all.

In illegitimate states, public compliance is achieved by force, and order rests on power. As the power balance changes so does the prevalence of protest and violent rebellion is seen as a legitimate mode of resistance.

There are also states in between – imperfectly and partially legitimate states. In them, public support for state authority is conditional on its proper policies and fair behavior. For Basques and Catalans in Spain, for Albanians in Macedonia, for Catholics in 20th century Northern Ireland, and for much of the Irish population in 1916, the foundation of state authority is questioned. The state cannot claim national or ethnic allegiance and even procedurally its democracy is seen as imperfect. It is therefore on trial. If it behaves well, the public will give it compliance, even acceptance. If it does not, it loses all legitimacy.

Legitimacy, a major asset for any state, may rest on a variety of foundations. Under the ancien régime it rested on tradition and on belief in the divine right of hereditary monarchy. It rests in nation-states on a sense of national belonging. It rests in democracies on the fair procedures of representative government, often founded – as in the USA – in a constitutional moment which defines for all the basic character and norms of fairness by which the system is to be judged and if necessary reformed. This procedural concept of democracy is, according to Habermas, the sole way that legitimacy can be regained once its traditional form has been eroded. But my point here is not to explore the bases of legitimacy but rather the problems faced by imperfectly legitimate states.

Imperfect, partial legitimacy is very fragile. Such states have fewer available policy options than fully legitimate ones. The state has few choices in response to armed protest and each carries with it major costs.

I. Repression. This is necessary since states have to ensure their reputation, what Weber called their monopoly of legitimate armed force. But repression alone, with all the evils and mistakes that go with it, is likely to reverse public attitudes and provoke a spiral of delegitimation.

II. Reform is necessary. Such states have to take forward a trajectory of reform in order to maintain public support. This is typically costly. Moreover it may be difficult for a state struggling with protest to see how and with whom to carry out reform.

III. Inclusion is desirable. If the state brings in the extremes and includes them in the reform, legitimacy is restored. But this assumes that the extremes will comply, and that this can be done without damaging the reputation of the state and incentivizing others to rebel.

The British state in Ireland

In Great Britain, the British state had and has legitimacy on traditional, national and democratic criteria, although intermittently the Scots have questioned it on each ground. In Ireland, it had legitimacy on none of these grounds. Indeed it failed for much of the century after the Act of Union even to win imperfect, partial legitimacy: Catholic emancipation was slow, the Famine showed the state’s lack of empathy with the people, only the North-East benefitted economically from the union. Eventually, goaded by Land War and nationalist disruption in Parliament, the state began to make amends and by the end of the 19th century it was initiating a set of very far reaching reforms. The process was stalled for the Great War, the government failed to face down the Curragh mutiny, and Ulster unionists opted out of Home Rule by force of arms. But was the trajectory not clear? It seemed so to a large segment of the Irish population who accorded the British state a partial, imperfect and conditional legitimacy, and even supported its war effort.

The 1916 rebels were not so convinced. And the British response to the Rising bore out their views. The artillery attack on Dublin, the repression, the lack of negotiation with moderate nationalists, even before the executions took place, lost for the British state the credit that had come from its previous reforms. Of course the state was faced with a difficult situation, and it wasn’t clear how and with whom it could continue the reform process. But its choice of repression was a bad one, even from its own perspective. It led to greater violence in the war of independence, and it pushed the country along the path to partition and an ongoing conflict in Northern Ireland that cost the British much more – in international reputation – than 1916 did.

The comparative literature shows that it is difficult for imperfectly legitimate states to cope with armed protest. Most choose repression. But, rather than a swift outcome as in legitimate states (think of Germany with Baader Meinhoff, or Italy with the Red Brigades or the Irish state’s capacity to marginalize republican dissidents), in imperfectly legitimate states this leads – as in Sri Lanka – to a long and bloody war. But sometimes the reform option is taken and I want to discuss three recent cases – Macedonia, the Basque Country and Northern Ireland – which exemplify some of the costs and benefits of this choice.

Among the new Balkan states, the Republic of Macedonia which came into existence in 1991 was far from the worst offender against its minorities. But there were grumbling discontents among Albanians, and they gave only conditional allegiance to the state. When an armed uprising began in 2001, provoked by the Kosovo crisis, the international community acted immediately and decisively to preempt it from winning wider Albanian support. They insisted on an end to violence, radical reform of the state to include Albanians and security for the state (by entry to EU and NATO). What is striking is the swiftness of response and also the failure to follow through, in both respects a function of the international character of intervention, decisive, powerful, with few endogenous levers of change.

Second, the Basque Country. ETA was a product of Franco’s illegitimate rule, and it continued its armed campaign with the imperfectly legitimate Spanish rule which followed Franco’s death. Finally the 1979 Statute of Autonomy for the Basque Country remedied many grievances, and let much politics be focused on the (legitimate) Basque Country Autonomous Community. ETA continued to politicize the legitimacy question, and extreme state repression helped them. In the event, however, progress in autonomous government was enough to keep ETA marginalized. Eventually – as late as 2010 – radical nationalists came to see the logic in a stronger democratic strategy, which may in the long run pose even greater problems for the Spanish centre.

Third, Northern Ireland. By the late 1960s the British state – if not the unionist devolved government – had begun to win partial and imperfect legitimacy from its Catholic population; the Keynesian Welfare state and the promises of ongoing reform boded well for the future. The Civil Rights Movement (CRM) expressed this conditionality, giving the state a chance to live up to its norms before giving fuller support. When the unionist government and British state failed to behave fairly, there was very swift delegitimation and the birth of the Provisional IRA. Indeed successive British governments had some difficulty in seeing what reform was necessary, how much and with whom. Only after the involvement of the Irish state did a costly, difficult direction of change became visible, starting with the Anglo-Irish Agreement of 1985. This gradually allowed the restoration of an imperfect legitimacy, the bringing in of the extremes, and a settlement in 1998 that has lasted to the present. Legitimacy, however, remains partial, imperfect, still to be earned with the new politics – and the promises behind it – still on trial.

Conclusion: the lessons of 1916

1916 is not atypical. It illustrates a particular sort of delegitimating process from which it is very hard for a state to recover. But rebellion does not always, or even usually, delegitimate states. It does not always, or even usually, give incentives for more rebellions. It is therefore not the dangerous event, to be condemned by all right-thinking people, described by some ‘revisionists’. Rebellion is usually crushed. It has a delegitimating outcome only if the legitimacy of the state is already imperfect and if the state takes the easy, repressive choice. Having done so, it was hard for the British state to recover. It would have been easier if it had not stalled the Home Rule process before the war or if it had taken on the army officers in the Curragh, or kept its Irish allies in position at home. But these choices would have been costly. 1916, and the subsequent century of intermittent conflict, challenges us to plot the pathways by which legitimacy was eroded, and by which it can – with great and continuing difficulty – be strengthened.

Jennifer Todd (Jennifer.todd@ucd.ie) is a professor in the School of Politics and International Relations, University College Dublin. Her publications (individual and joint) include Dynamics of Conflict in Northern Ireland (Cambridge UP, 1996), Europe’s Old States in the New World Order (UCD Press, 2003), Ethnicity and Religion: Intersections and Comparisons (Routledge 2010), Breaking Patterns of Conflict in Northern Ireland (Routledge 2014)

C. Jung, E. Lust-Okar, I. Shapiro, ‘Problems and Prospects for Democratic Settlements: South Africa as a Model for the Middle East and Northern Ireland?’, Politics and Society, 33.2 (2005)